“When Covid hit we knew there would be people struggling to get food,” explains Angela Doggett, Chief Executive of Bechange, a community hub that’s been operating in Aylesham, Canterbury for over 23 years. During normal times they run workshops, clubs, and classes to support people dealing with issues ranging from financial difficulties to health problems. As the pandemic worsened, they began operating a thrice-weekly meal delivery service, dropping off five full meals per week to around 120 people across the community. All in all Bechange has delivered at least 7000 meals since the start of April.

“We worked with local food banks, schools, and churches to find out who was in need,” remembers Angela, explaining that Bechange had only just launched a weekly community lunch program a few weeks before Coronavirus arrived. They realised they would need to adjust quickly to the new reality and scale up to meet the surge in demand from people struggling to feed themselves during the pandemic. “We had to learn a lot very quickly about food hygiene, how to pack a box and transport it safely,” recalls Angela, “and we’ve been running this while still doing out regular support work remotely.”

The pandemic has exacerbated the challenges that many in rural communities like Aylesham face in getting safe, affordable food: “A lot of people live quite far from the nearest supermarket. For single parents to do their shopping they might have to take their children on the train or the bus. Financially, for some people, they didn’t know how they’d be able to feed themselves. There are a lot of people who were just managing before and this has pushed them over that edge.”

Working with FareShare has allowed Bechange to reach as many people in need as possible. “The food from FareShare has been brilliant,” beams Angela, “it’s allowed us to cook so much more on our budget. We’ve been able to make our funding stretch so we could keep going with the food deliveries for longer. And it’s allowed us to dedicate more time to applying for funding for our other work.”

Angela and her team have also been impressed by the quality of the food: “We get cheese, pasta, tinned tomatoes, things we can cook with. The meals are cooked the day they go out by a small team of volunteers. We do mac & cheese, roast, apple crumble, tuna and pasta bakes are very popular. A few weeks ago when it was hot out we had a lot of cheese and crackers in so we were able to do a ploughman’s lunch. And there’s always a pudding!”

Bechange’s deliveries aren’t just about the food though: “It gives people a bit of peace of mind. Especially for people who’ve been ill or caring for someone who’s been ill it’s been a huge relief for them to know they’re at least going to get that one meal a day,” explains Angela. “It’s a good way to check up on people as well,” she continues, “a lot of people have been really lonely during this. For some of the older people especially the pandemic has made life really difficult. Of course, we have to do things safely and keep our distance, but even just having someone knock at your door a few times a week to make sure you’re fed and you’re ok can help alleviate some of that loneliness.”

Angela and her team are still learning as they go, but they’re committed to continuing to be there for the community as long as there are people in need: “We’re trying to figure out now what our food delivery will look like going forward but we want to continue in some form, because there are still people who need help.”

The People’s Pantry – creating space for community through food 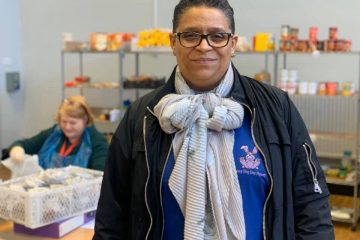