Bridgend Farmhouse is a hive of activity all centred around the power of food. Engaging and working with vulnerable people in South Edinburgh, the charity was established last year after the building it inhabits was restored – and it wasn’t long before they signed up to FareShare.

Owned and run by the community, the centre runs a number of food initiatives including pop up dinners, a community café. a weekly community meal with a ‘pay what you can’ policy, and real fast food – a free service whereby volunteers create two-course meals in the building’s kitchen and then deliver and serve them to vulnerable people, such as at local nursing homes. On any week the centre can expect up over a hundred people coming through the doors.

“We work with people from all walks of life – vulnerable teens, elderly people, people in recovery, retirees and complex people with physical or learning disabilities,” Donna McArdle, Development Manager at Bridgend Farmhouse, explains.

“The food plays a vital role in helping us engage and bring together the multigenerational community we have around us.”

FareShare Central & South East Scotland, based in Edinburgh, delivers around 40 kilograms of food to Bridgend Farmhouse each week – enough to help the charity provide up to 200 meals for the community.

Donna adds: “We mostly ask for raw ingredients – the kind of stuff that costs a lot of money but which we need all the time. So we regularly receive meat, fish, dairy products such as milk and cheese, vegetables. Our most popular dishes include stovies, soups and crumble.

“A lot of the people who take part in our initiatives also volunteer in the kitchen, so receiving a range of different and unpredictable ingredients each week has taught them to be think creatively. Over time, learning how to be resourceful and think outside the box also instils in them a greater sense of confidence – and that’s the best thing we can give them.

“Once we empower them to believe in themselves, that’s when we start to see a wider impact with other areas in their lives, too. It’s unbelievable the role food and cooking can make.”

Earlier this year, FareShare Central & South East Scotland underwent a warehouse refit, with the installation of a new chiller and freezer – which was funded by Asda through the Fight Hunger Create Change programme. The installation has afforded the FareShare Regional Centre additional capacity to recruit up to 20 new local charities, serving the needs of the community like Bridgend Farmhouse.

Lynne Collie, Manager at FareShare Central & South East Scotland, said: “Each week we help to feed thousands of people at risk of hunger or isolation via frontline projects like Bridgend Farmhouse. But we know demand for our support is rising, which is why we are grateful for Asda’s support.

“Food plays a central role in bringing people together and forging human connections and projects like Bridgend, which provide a safe and welcoming environment, are a great example of using food to engage and support communities.”

“We work with people from all walks of life – vulnerable teens, elderly people, people in recovery, retirees and complex people with physical or learning disabilities. The food plays a vital role in helping us bring together the multigenerational community we have around us.” 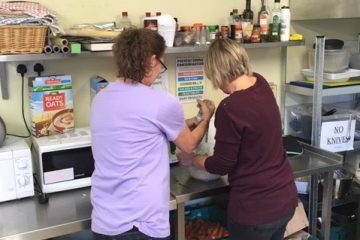