Catching up with Syd at FareShare Grampian

Retired postal worker Syd Davidson is one of CFINE/FareShare Grampian’s longest serving volunteers who dedicates four days a week to delivering food to his local charities and organisations in Aberdeen. When he joined in 2013, his background made him a perfect fit for the role of driver, but it’s his dedication and commitment which really sets him apart.

“Without Syd the FareShare operation would be heavily diminished – we couldn’t do a lot of the stuff without him basically,” says depot manager Graeme Robbie. “Syd always has in his mind the most efficient route to any given destination which is a great thing. However, if there is a specific run set up he doesn’t agree with, he won’t have a problem deviating from it…which makes us laugh. He will change routes according to his own map in his mind, over-ruling his trusty companion Steve and even the management!”

Thanks to Syd’s support over the past six years, FareShare Grampian has grown significantly from delivering only a few tonnes of food a year to several hundred. Every now and again he and his wife Babs may disappear on a cruise holiday or a relaxing weekend break away, but mostly Syd will be found either driving, loading or unloading his van in and around Aberdeen… always with a smile on his face (even in the Scottish dreich)!

“He’s become part of the furniture and we really do rely on him so much,” says Graeme. “Apart from his reliability and hard graft, he’s also completely dedicated to reducing food waste. He doesn’t like to see anything go to waste and he takes it personally if people don’t want to take his beansprouts, or whatever!”

Want to work with FareShare? Check out the current career opportunities, or  volunteer at your nearest Regional Centre to help us get good food to thousands of frontline charities across the UK.

A standard driving licence is all you need to deliver our food once or twice a week to children’s clubs, homeless hostels and refuges in your area. We’ve got the vans, we just need you!

Catching up with Keith at FareShare London 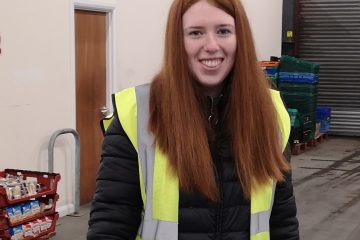 Catching up with Ciara at FareShare Northern Ireland