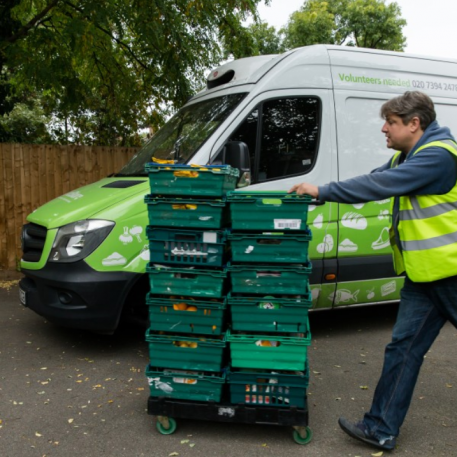 London’s three biggest food redistribution charities have partnered to provide an emergency response service for the capital during the coronavirus crisis. City Harvest, FareShare and The Felix Project, which access and divert food to vulnerable people across the city, have formed the London Food Alliance and will be delivering food to new London Borough Network hubs.

The London Borough Networks are working to establish hubs to distribute food to people in local communities across London in the next week. This model will connect charities with essential services and will work to identify the most vulnerable people in the area, so that no Londoner is left behind during the outbreak.

Families who were already struggling have been hard hit by the coronavirus, with many people losing their jobs or struggling to get food. The homeless, elderly, poor and vulnerable Londoners who are self-isolating are also increasingly struggling to access food.

Laura Winningham CEO of City Harvest, says: “City Harvest excels as a rapid response unit for surplus food, and now more than ever we are keen to join forces to feed London’s hungry. As charities evolve the way they reach those in isolation, we are working with the London Food Alliance to ensure we can deliver nutritious food to those most in need.”

Rachel Ledwith, CEO of FareShare London, says: “FareShare London working together with The Felix Project and City Harvest means we will be able to distribute much greater volumes of food, which is needed among London communities now more than ever. The alliance will benefit from the relationships FareShare has with over 600 food partners across the UK, and will provide our network of hundreds of charities across the capital with greater reassurance there is a food supply to help them deliver meals and vital food supplies onto the doorsteps of the most vulnerable.”

Mark Curtin, CEO of The Felix Project, says: “The Felix Project has been working flat out to feed London during this unprecedented time of need. We were already London’s biggest food redistribution charity, but our organisation has expanded enormously to meet demand over this past week. We can do so much more by working together. I’m proud to work with FareShare and City Harvest to get nutritious to food some of the most vulnerable Londoners during this crisis. This is an ambitious project and we can only do it with the support of London behind us.”

Running on Empty: FareShare survey highlights dramatic impact cost of living crisis is having on the most vulnerable in society