“I used to rely on food banks. Now I’m giving it back to people who need it. It feels good to help out.”

Steve has been a part of the team at FareShare Sussex for more than three years, the first year and half of which he volunteered in the warehouse and on the vans, before a paid role became available and his tireless commitment to FareShare meant he got the job.

FareShare provides almost a million meals a week for people who might not otherwise eat, and for Steve that is a cause particularly close to his heart after previously being homeless with his young daughter for several years.

Steve explains: “I know how hard it was to be hungry. I walked past my local foodbank two or three times before I went in, asking for help can be so difficult. Now I am in a place I can help and it feels good.

“My daughter was five when we became homeless. I had a house I shared with my dad but he had to have his leg amputated, making the house no longer suitable. When he moved out we were asked to leave.

“After that we stayed on a friend’s sofa, but you can only do that for so long. Then we were put into temporary accommodation, but I couldn’t afford food as all our money had to go on travel to take her to school.

“I was a single parent so every penny I got went on her. I gave my daughter whatever was in the cupboard, and whatever she didn’t eat, I had. We learned to live on not a lot of food. It wasn’t a nice feeling.”

It was at this point that Steve found out about his local food bank and plucked up the courage to ask for help. What he didn’t know at the time was that much of the food the foodbank gives to people is provided by FareShare.

“I didn’t think I would ever need a food bank. Asking for help I found hard but I knew if I didn’t do it I would have struggled for another week,” Steve says. “It was daunting. I didn’t know what to expect. But the lady I met was lovely, they didn’t judge and made me feel comfortable.”

Fortunately Steve was able to eventually get back on his feet when he and his daughter got a house in Hove – closer to her school and halving travel costs.

“After we moved things got easier and I wanted to give back to show how thankful I was,” Steve says. “I went to the food bank and asked to help and they said they didn’t need me but I could go to FareShare – so that’s exactly what I did. That’s where I am now.

“Seeing the reactions on people’s faces when you turn up with a tray of food. It hits home – I was in that position before but now I’m able to help.

“I think I’ve come a long way from using a foodbank. I was volunteering for FareShare as much as I could because I loved it so much, then a year or so later, a job became available and I got it. I’ve come full circle now.

“Compared to where I was five years ago, I’m a completely different person. I know what it can be like to have nothing. It means a lot I am there to help homeless people, people who need food and are struggling.”

It’s brilliant that Steve is back on his feet and helping to give back to his community through FareShare. With more than 8 million people across the UK still struggling to afford to eat, the need for our service has never been higher.

If you’ve been inspired by Steve’s story and would like to help FareShare get surplus food onto the plates of those who need it most, please donate here.

“I gave my daughter whatever was in the cupboard, and whatever she didn’t eat, I had. We learned to live on not a lot of food. It wasn’t a nice feeling”

“I know what it can be like to have nothing. It means a lot I am there to help homeless people, people who need food and are struggling” 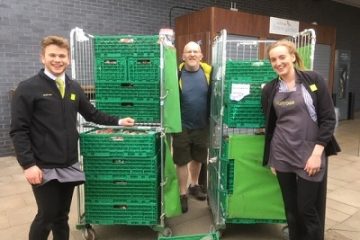